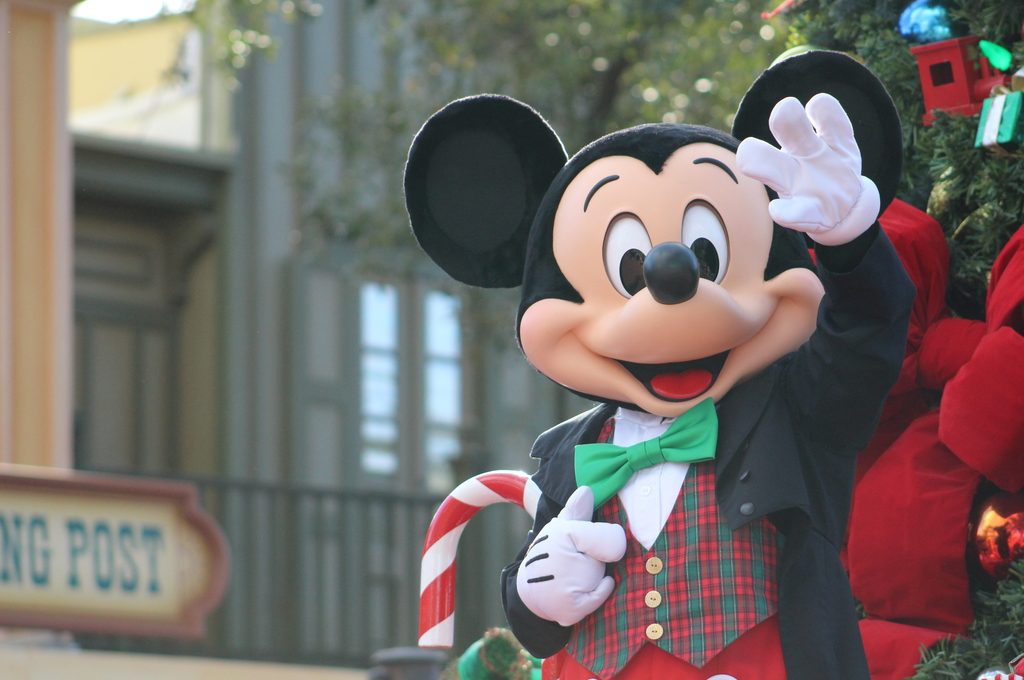 Magical extras are happening all the time at Walt Disney World. Disney also loves to celebrate holidays big and small! Use the calendar below to see if any parties, festivals, openings, special events, or holidays are taking place during your visit. They can make your visit more magical (or more crowded).

Please note that some items on the calendar require advance registration or a ticket purchase. If you have any questions, email us at info@mainstreetpopin.com

NOW! Gingerbread Displays!!! See the Grand Floridian’s life-size gingerbread house, complete with a chimney that blows clouds of cinnamon! Hop on the Monorail over to the Contemporary resort and you’ll also be able to see the Cinderella Gingerbread Castle! Transport yourself over to the BoardWalk area and see the working gingerbread and chocolate carousel at the Beach Club!

NOW through Dec 24 The Disney Ultimate Toy Drive takes place. At Disney Springs at Walt Disney World Resort, TOYS FOR TOTS collection bins will be located at the World of Disney store, Marketplace Co-Op, Star Wars Galactic Outpost, and the Disney Springs Welcome Center. Walt Disney himself was an early participant in Toys for Toys. It was Walt Disney Company artists who came up with the catchy name and logo, which is still used today.

NOW through November 19 – The EPCOT International Food and Wine Festival is happening!!! The festival includes 25 Global Marketplaces, the Eat to the Beat Concert Series, Remy’s Ratatouille Hide & Squeak, and Emile’s Fromage Montage! POP IN HERE to link to this year’s Foodie Guide. POP IN HERE for the concert series lineup.N

NOW Black Panther: Wakanda Forever is playing at the AMC DINE-IN Disney Springs 24 movie theater. Need a rainy-day activity or a break from the parks? Take in a Disney Blockbuster!

NOW through the spring of 2023 Walt Disney World is hosting The World’s Most Magical Celebration to honor the Magic Kingdom’s 50th Anniversary. The celebration kicked off on Oct. 1, 2021.

NOW Sneak peeks at scenes from Strange World, the newest animated film from Disney Studios are being shown at Hollywood Studios.

Most of November Keep an eye out for the fall treats being offered for a limited time around Walt Disney World. Some promising options include the Pumpkin Pie Shake at Beaches and Cream (Beach Club Resort), the Holiday Turkey Sandwich at Gasparilla Island Grill (Grand Floridian Resort), and the Caramel Holiday Flight at Karamell-Kuche in EPCOT.

Now Through December 31 Popcorn carts around the Animal Kingdom will be selling the The Musical Holiday Tin Premium Bucket, the Mickey Mouse Snow Globe Sipper cup, and the Gold Tree Popcorn Bucket

November 11-December 31 Tusker House (Animal Kingdom) has a holiday specialty drink, the In Holiday Fashion (also being served at various location inside of Hollywood Studios).

November 13 Blizzard Beach Reopens with some new FROZEN features like Olaf and his Snowgie friends.

Nov. 13-14 – Sugar Ray at the America Gardens Theatre in EPCOT

November 17 Go to the BoardWalk Inn to see the entire BoardWalk area recreated in gingerbread!

November 24 Thanksgiving (Numerous Disney restaurants will be serving thanksgiving dinner during the week. Some offerings are traditional and some play to the restaurant’s theme.)

November 25 Kick off of the EPCOT International Festival of the Holidays.

November 25 EPCOT’s Candlelight Processional at the American Gardens Theater (this even generally runs until Dec. 24)

November 27-January 2 Traditional Italian Panettone will be available at the Le Petit Cafe at the Riviera Resort.

November 28-December 31 The Mara (Animal Kingdom Lodge) will add a special chai mousse and coconut marshmallow dessert called the Mickey Santa Hat to its menu. Guest can order a Holiday Shake from the Beaches and Cream restaurant (Beach Club Resort).

November 28-December 31 Candy Cane Lattes will be on the menu at the Kona Island Coffee Bar (Polynesian). The perfect caffeine boost before boarding the Monorail!

November 28-January 7 For cheesecake lovers, you might like to try the Vanilla/Cherry/Gingerbread Cheesecake dessert at Primo Piatto (Riviera Resort)

December Blizzard Beach will add some holiday cheer to the waterpark with themed treats and holiday inner tubes. You can even meet a tropically-dressed Santa.

December 1-23 Horse-Drawn, Holiday Sleigh Rides can be purchased at the Fort Wilderness Campgrounds. (Advance booking is highly recommended and may be done 60 days in advance.)

December 1-26 At the BoardWalk Deli, some holiday treats added to the menu include: the apple cider loaf, Peppermint Brownie Cheesecake, and the Hot Cocoa Cupcake.

December 1-31 Just about every resort added some sort of holiday goodies to its menus this month. CLICK HERE to read the official Disney Eats Foodie Guide for the holidays.

December 1-31 Trader Sam’s Grog Grotto and Tiki Terrance (Polynesian) will be serving up specialty drinks for the holidays.

December 1-January 7 At Coronado Springs, head to the Dahlia Lounge or Toledo for a Poinsettia Punch or to the Three Bridges Bar & Grill for a Spiced Chocolate Mexicana.

December 1-January 8 Steakhouse 71 will add a drink called the Snowy Dreams. It is a rendition of Walt and Lillian Disney’s favorite holiday beverage.

December 4-31 Guests at Coronado Springs can celebrate the holidays at the Barcelona Lounge with a Holiday Tart. A Gingersnap Cold Brew will be offered Dec. 4 to Jan. 2.

December 10 Dapper Day Holiday Outing at Hollywood Studios. See the well-dressed Disney fans from Dapper Day dressed to the nines! Visit the park to see or join in on the fun. Learn more at dapperday.com

December 11 Dapper Day Holiday Outing at the Animal Kingdom Studios. See the well-dressed Disney fans from Dapper Day dressed to the nines! Visit the park to see or join in on the fun. Learn more at dapperday.com

December 11-25 These are the only dates you can head on over to the Polynesian Village to enjoy a Moana Holiday Cupcake at Capt. Cook’s or a Stitch Holiday Dome at the Kona Island Coffee Bar.

December 16 Avatar: The Way of Water opens in Theaters (Team Tip: The AMC at Disney Springs is a “plussed up” place to check out a new release.)

December 18-24 Steakhouse 71 will be offering a Holiday Brunch.

December 18-25 Toledo (Coronado Springs) has added a coconut panna cotta to its menu.

December 18-29 For a limited time only the Roaring Fork (Wilderness Lodge) will be serving a Christmas Tree Mousse, a Peppermint Cheesecake, and Molasses Crackle Cookies (a Wilderness Lodge tradition).

December 19-31 Holiday Mousse Domes will be on sale for a limited time at Animal Kingdom’s Creature Comforts.

December 22-26 Grab an ‘Olu Mel Christmas Float at the Pineapple Lanai (Polynesian) made with Dole Whip Lime and Pineapple Juice.

December 25 Various quick-service resort restaurants will be adding a “Christmas Feast” (turkey, cornbread stuffing, mashed potatoes and gravy, veggies, and cranberry relish) to the menu on Dec. 25 only. A few places will also be offering an Apple Tart that day only as well.

December 25 For Christmas only, The Turf Club Bar & Grill (Saratoga Springs) will be serving a holiday dinner featuring pork shank. A special chocolate lava cake will be on the dessert menu (reservations recommended).

December 25 and December 31 Citricos (Grand Floridan) will add a chipotle-maple glazed pork chop dinner to its menu for the holidays.

December 26-January 8 Steakhouse 71 will be offering a Holiday Brunch.

The Disney Company, which was started by Walt and Roy Disney in 1923, turns 100!

Coming to Disney’s BoardWalk: Several enhancements are slated for this resort area open to the public. Additions will include: The Cake Bake Shop by Gwendolyn Rogers (a new table service restaurant and bakery); a new BoardWalk bakery sandwich shop; a new coffee bar at the BoardWalk Inn, and updates to the Inn’s lobby, lounge, and guest rooms.

January 22: Start of the Chinese New Year and the Year of the Rabbit

March 17: St. Patrick’s Day (In a party mood? Go to the website for the Raglan Road Irish Pub at Disney Springs! Reservations fill up quickly on the nights surrounding the holiday.)

March 20: First Day of Spring! The EPCOT Flower & Garden festival should be in full bloom by now!

April 9: Easter Sunday – The Easter Bunny often makes an appearance at the Magic Kingdom on this day!

May TBD: A Live Action remake of The Little Mermaid hits theaters. (If you are near Disney Springs, try to catch the film at the AMC theater!)

May 4: May the 4th Be With You (a.k.a. Star Wars Day and the perfect time to be at Hollywood Studio’s Galaxy’s Edge.)

May 14: Mother’s Day – Disney is known to offer up a few specialty desserts and brunches on Mother’s Day weekend.

May 29: Memorial Day – If you are at the Magic Kingdom do make the effort to see the flag ceremony in front of City Hall.

June through November: Hurricane Season (While a hurricane is possible at any time, the peak months for rough weather are August and September.)

June 16: Pixar releases its 27th film, Elemental, the story of two beings made of fire (Ember) and water (Wade) . The duo learn that despite their differences, they are actually a lot alike. (If you are at Walt Disney World during a film’s opening, it’s almost sure to be playing at the AMC located in Disney Springs!)

June 14: Father’s Day – Disney likes to make fun and chocolaty treats for Dad’s Day. Be on the lookout!

June 21: First Day of Summer (and longest day of the year). Don’t forget your sunscreen!

July 4: Independence Day – the most amazing time of year to see Disney fireworks!

July 14: Bastille Day (Check out EPCOT’s France Pavilion, something special may be happening to commemorate this uniquely French holiday.)

July 17: National Ice Cream Day! This one’s not hard to celebrate at Disney. Ice cream carts and shops seem to be everywhere!

November 7: Election Day – If you are registered to vote, don’t forget to stop by the polls on your way to the parks!

December 8: The 1st Day of Hanukkah

December 31: New Year’s Eve (Check early for special parties that may be happening to ring in the New Year! Fireworks at midnight may be part of the festivities on Dec. 31 as well!)