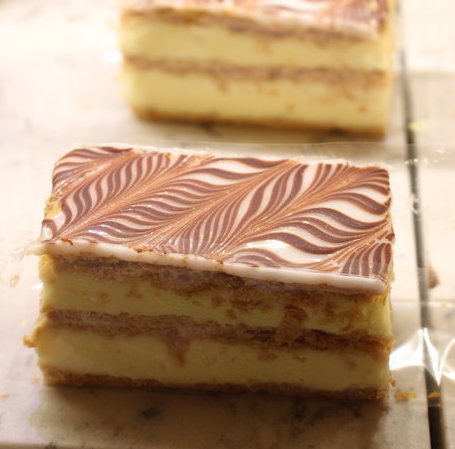 Les Halles Boulangerie-Patisserie is my favorite spot in all of Epcot to grab breakfast, lunch, dinner, or a snack. There are multiple reasons to check out this quick-service location in the World Showcase’s France Pavilion: the croissants, the eclairs, the incredible jambon beurre sandwiches, and the champagne. But what keeps me going back again and again and again is the patisserie’s glorious Napoleon.

If you’ve never had a Napoleon, you really are missing out. It’s the perfect mix of crunch, pastry cream, and chocolate. (And it’s priced at $4.25—a steal at Disney.)

In France, this temptation is called a mille-feuille, which means “thousand leaves”. One bite, and you’ll realize how accurately the French named this concoction.

Made pretty traditionally, Epcot’s Napoleon consists of three layers of crisply baked puff pastry and cold pastry cream. It is topped with a combed glaze of white fondant frosting and melted chocolate.

The names Napoleon and mille-feuille are used interchangeably, but a purist might say that a mille-feuille is topped with confectioner’s sugar, not fondant. (Originally, Epcot served the powdered sugar version, but switched to the iced version years ago.)

The history of how mille-feuilles became known as Napoleons outside of France is surrounded in mystery. According to Julia Child in Mastering the Art of French Cooking Volume II, the dessert may have gotten its name because it was Napoleon’s favorite (although the story goes that he overindulged on the eve of Waterloo, and it led to his defeat). The second theory Child shares is that the Napoleon is not French at all, but invented by a Danish chef for a state visit between Emperor Napoleon and the King of Denmark. Lastly, Child throws out that some Italians simply think the Napoleon is a “corruption of Napolitain”, a layered style of desserts from Naples.

Regardless of which name you choose, the castmembers at Les Halles Boulangerie-Patisserie will joyfully serve you up this signature treat any time of day. Patisserie hours are generally 9 a.m. to park closing. Bon appetit.