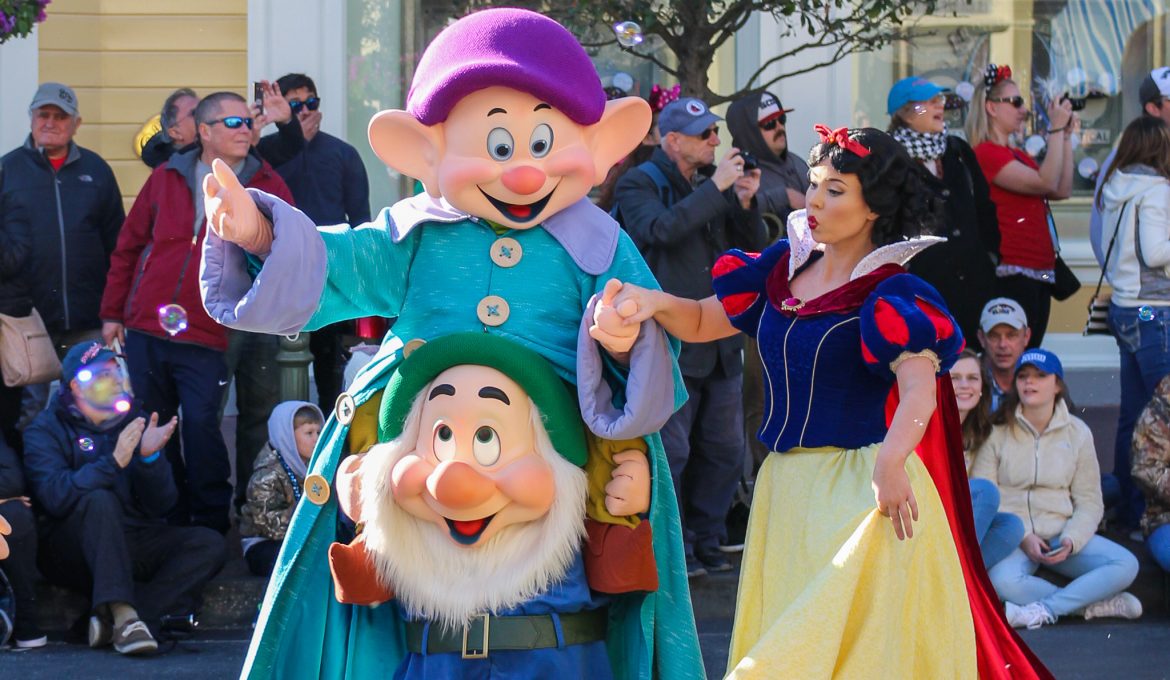 Just as I was preparing to get back to normal after the holidays, a sheet of ice covered the Midwest this weekend and anything that involved driving somewhere seemed like a bad idea.

So, I decided to get my Disney fix by diving into some history—specifically Snow White and the Seven Dwarfs and how the Disney film compares to the Grimm’s Fairy Tale by the same name.

Snow White and the Seven Dwarfs—the world’s first feature-length animated film—was a cinematic milestone when it premiered on Dec. 21, 1937.

“Snow-White and the Seven Dwarfs”—the short story—remains one of the most popular fairy tales published by Jacob and Wilhelm Grimm in 1812.

Walt remembers seeing a silent-movie version of Snow White in 1916 (Disney historians think it was 1917). The story stuck with him for many years, and when the success of his company made it possible for him to try something new in animation—a full-length animated feature film—Walt was sure Snow White was the fairy tale to use.

Lots of people thought Walt was crazy. Movie-goers wouldn’t sit through a 90-minute cartoon. The film was slapped with the nickname “Disney’s Folly”. But Walt believed in the project so much that he put his company’s entire future on the line. He spent three to four years and all the money he had and could borrow. Had Snow White been a flop, the Disney company would have been bankrupt in the middle of the Great Depression. Talk about stress.

Snow White and the Seven Dwarfs ended up being one of Walt’s greatest triumphs. The money came pouring in and the Disney Company was able to grow into the company it is today. Eighty-three years later, moviegoers of all ages still enjoy the film. The Disney parks offer Snow-White themed attractions, meet-and-greets with characters, food, and merchandise.

What is it about the story of Snow White? Where did it come from?

Historians aren’t sure exactly where Snow White originated but some think it was based on the love story of Margaretha Von Waldeck, a German countess, and Prince Philip II of Spain. She was beautiful, had a strict stepmother, a prince fell in love with her, and she was possibly poisoned at age 21. (Oh, and her dad owned a mine where children labored and lived in groups of 20 to a room.)

There is also evidence that the Evil Queen may have been based on the stepmother of Bavarian Baroness Maria Sophia Margaretha Catharine. Maria’s stepmother possessed a mirror that “always told the truth.”

A third theory is that Snow White’s appearance is based on the Greek Goddess of Snow, Khione. The goddess is said to have pale skin like snow, lush black hair, and brown eyes. The Goddess’s story, however, has nothing in common.

The Grimm Fairy Tale is no doubt the origin of the Disney film, but there are some interesting differences. (I would highly advise reading the Grimm’s tale. It’s only a few pages and boy does it have a dark side.)

The Grimms open their story with Snow White’s mother, who is embroidering near a window in winter. She pricks her finger and blood drops onto the snow. At that moment she wishes for a child “as white as snow, as red as blood, and as black as the wood of the embroidery frame.” Snow White is born soon after and possesses all those features. Unfortunately, the Queen dies in childbirth.

This scene may have been planned for the Disney movie. Disney illustrated a Snow White book for Little Golden Books in the 1940s. The Golden Book opens with a drawing of Snow White’s mother and wording almost verbatim to the Grimm opening. So Disney must have had some thought of using it at some point.

For whatever reason, the Disney film never shows the mother. Instead, a live-action storybook opens the film and we read about Snow White’s appearance (skin as white as snow, hair as black as ebony, and lips red as a rose—not blood). We also learn of Snow White’s mother’s death, her father’s remarriage, and the new Queen’s commands that Snow White dress in rags and work as a scullery maid (which actually comes in handy when Snow White later enters into indentured servitude at the dwarfs’ cottage).

In the Grimm story, Snow White is only seven years old when the mirror declares the child more beautiful than her stepmom. In the film, no age is stated, but she’s definitely not seven.

In the film, Snow White meets the prince in the first animated scene. They fall in love instantly and she spends the rest of the film dreaming of seeing him again.

Both the fairy tale and the Disney film have the Evil Queen commanding a huntsman to kill the princess and bring back her heart in a box. In both stories, the huntsman cannot do it. He tells Snow White to run away and returns to the castle with a pig’s heart. (In the Grimm’s tale, the Evil Queen takes it one step further and eats the heart. Yuck!)

The book and film follow the same storyline in the scenes where Snow White finds the dwarf’s cottage and agrees to take care of the dwarfs in exchange for her own room and board. Snow White’s relationship with all the forest creatures is a Disney addition to the story. Her ability to understand animals (and they her) was added to highlight the princess’s gentle, kind nature.

In both versions, it is through the mirror that the Evil Queen discovers that Snow White lives and where. But it is at this point that the Grimm’s plot has more action. The Evil Queen is foiled repeatedly in her attempts to kill Snow White. In the movie, it takes just one try.

The Grimm’s first murder plot involved the Evil Queen dressing as an old peddler and strangling Snow White with a piece of lace. The dwarfs come home to find the princess dead, but when they untie the lace she starts breathing again. The Evil Queen learns of her failure from the magic mirror.

So, the Evil Queen tries again. This time she uses witchcraft to make a poisoned comb. She dresses as a different old woman and convinces Snow White to put the comb in her hair, which kills her. The dwarfs return home, pull the comb from Snow White’s hair and she comes to. The mirror informs the Evil Queen that the princess survived again. (At this point, you’d think that Snow White would stop trusting old women, but remember, she’s seven.)

It is the third attempt to kill the princess that we get to see the Evil Queen use a poison apple. Snow White takes a bite and dies. This time the dwarfs do not arrive home in time to save her. This is the death scene depicted in the movie.

In both stories, the dwarfs cannot bear to bury Snow White, so they build a glass coffin and leave it in the woods, where one of them always keeps watch.

In the book, many years pass before the prince finds the coffin (which is good, because Snow White is still 7). In the film, winter passes into spring.

The Disney film has a magical romantic ending. The prince finds the glass coffin, kisses the princess, and “love’s first kiss” breaks the spell. (This is also the point where my 11-year old asks, “Are we watching Sleeping Beauty?”)

The Grimm’s ending is not romantic at all. In fact, it is darkly comical.

In the brothers’ version, the prince finds the coffin that’s been in the forest for years. He’s never met the princess before, but he thinks she’s pretty so he asks to BUY the coffin from the dwarfs. The dwarfs refuse. (Good Dwarfs.) But then they notice how in love with the princess the prince is, so they GIVE HIM the coffin. (Bad Dwarfs.)

While carrying the coffin home, the prince’s servants trip! The jolt creates a Heimlich maneuver, the apple is dislodged from the princess’s throat, and Snow White returns to life.

But that’s not all. There’s the Evil Queen to deal with.

In the Disney film the dwarfs chase her up a mountain and she falls off a cliff. In Grimm’s tale, Snow White and the prince invite her to their wedding where red-hot iron shoes are placed on her feet forcing her to dance until she falls down dead. Whoa!

So, that’s our Disney history fix on an ice storm day. I hope it inspires you to check out the Disney classic film in a new way.