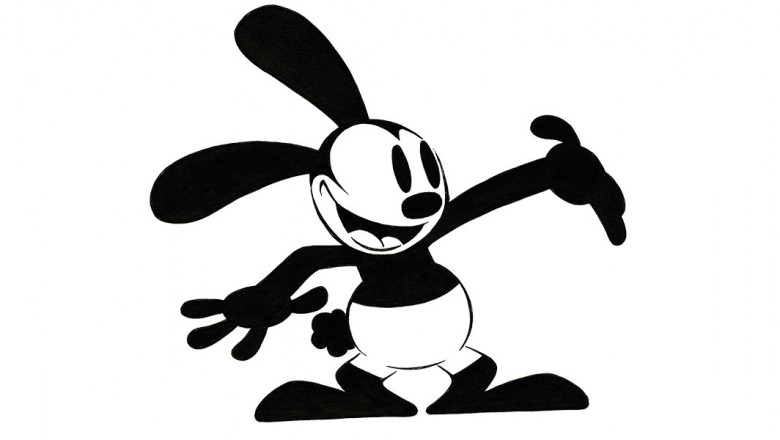 What better time than the holidays to share feel-good stories about finding light in the darkness?

One such narrative is the true-life Disney tale of Oswald the Lucky Rabbit. It’s a story of redemption and coming home, and wow, couldn’t we use a story like that right now?

So, who is Oswald the Lucky Rabbit?

Way back in 1927 (before there was a famous mouse named Mickey) the Disney Studio was hired by Universal to create a cartoon series about a rabbit. His name was Oswald and he had distinct black ears, three fingers and a thumb on each hand, and black oval eyes. (Let’s face it, the first Mickey Mouse ended up looking a lot like Oswald.) For over a year, Walt and Ub Iwerks created 26 silent cartoons featuring the Lucky Rabbit.

Walt and Ub poured their hearts into the Oswald series and it was becoming popular. When the contract came up for renewal, Walt traveled to New York City with his wife, Lillian, to renegotiate the terms at a higher price per cartoon.

Walt’s hopes for a more lucrative deal were quickly dashed, however, when he was told that the rights to Oswald didn’t belong to him. The Lucky Rabbit was the property of Universal and unless the Disney Studio wanted to make the series for less, Universal would find someone else to do it.

Walt refused and was out. Even worse, his distributor—a dastardly man named Charles Mintz—had secretly hired away most of the Disney Studio’s animation staff to produce Oswald without Walt and Ub.

The news devastated Walt and it changed the way he did business forever. On the train trip home to tell his business partner and brother, Roy, the bad news, Walt vowed never to work for anyone else again.

In true Hollywood fashion, however, that’s far from the end of the story.

Walt and Ub worked day and night to create a new character. The result was Mickey Mouse. But feeling they needed more than just a new lead, the duo took things a step further and revolutionized the animation industry with synchronized sound.

The rest, as they say, is history. Mickey Mouse became an icon and Oswald the Lucky Rabbit faded into oblivion.

Disney, the owner of ABC, is in negotiations to allow sportscaster Al Michaels out of his contract so he can work for NBC, which is owned by Universal. Disney executives see a golden opportunity to make a deal—Michaels for Oswald.

It worked and in a good-natured, light-hearted way, a human sportscaster was traded for a cartoon rabbit. After 78 years, Disney CEO, Bob Iger, was able to tell Walt’s only surviving daughter, Diane Disney Miller, that Oswald was coming home.

“I wanted to complete Walt’s mission,” Iger is quoted as saying. “I knew there was an empty spot in his heart since Oswald left.”

Although he may never become a household name, Oswald Lucky Rabbit was never forgotten by the company that created him nor the family that lost him.

The word Ohana is used a lot by the Disney Company. In Hawaiian Ohana means family. And Disney fans know, “Family means nobody gets left behind or forgotten.”

Happy Holidays to you and your Ohana.

The story of Oswald the Lucky Rabbit is just one of many feel-good short histories we hope will live on in the hearts of Disney fans forever. If you’d like to learn more, I’d suggested reading Walt Disney: An American Original by Bob Thomas or David Bossert’s book, Oswald the Lucky Rabbit: The Search for the Lost Disney Cartoons.

Thanks for Popping In!﻿