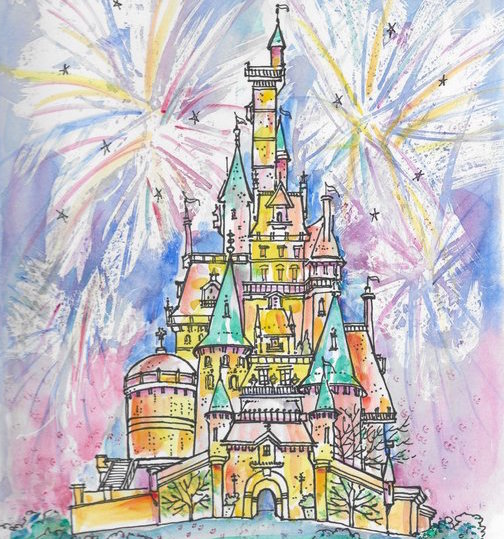 It’s a frequent question (or judgmental comment) Disney fans get.

But I totally understand why it’s asked. My family took the same summer vacation trip every year for most of my youth, and I vowed that when I was a grownup, I’d go somewhere different every summer. But here I am, an obsessed Disney blogger, planning another trip to Disney.

So, I’m here to do some self-reflection and discover, “why?”

When I was five, my grandparents retired to Florida. Since we lived in Michigan that meant we only visited once a year. This was in the 1970s, so part of our visit usually included a day trip to the Magic Kingdom. Back then, it wasn’t much of a “World”. There was the Magic Kingdom, the Contemporary Resort, and the Polynesian Resort.

Thinking back, getting there must have felt like a wrong turn into nowhere. One minute you’re on the highway and the next you see magical structures sprouting out of the tropical wilderness. I compare it to the movie scene where Dorothy sees the Emerald City for the first time.

It’s an impression that has stayed with me.

I got the opportunity to take two Disney trips in my 20s, still on my parents’ dime. This was the 1990s and the parks had off seasons. One of those visits was in October and it was almost like we had the park to ourselves. Every attraction was a walk on, I could have skipped down Main Street, U.S.A. twirling and swinging my arms without bumping into a soul, and the New Year’s “Party” at Pleasure Island had nine guests in attendance the night we went.

That October trip sucked me in completely, and it was at that point that my yearly plots to return began.

But I never thought it would go on this long.

I figured I’d eventually do and see (and eat) everything, and the need to go back would go away. But it never did. New parks opened and new lands were added. Now there is almost a constant stream of announcements for new attractions, new restaurants, new hotels, new extras, and new menus.

But it’s not just the new that intrigues me. I have this puzzling tug to check on all the old things as well—the Haunted Mansion, the Carousel of Progress, the People Mover, the Poly and the Contemporary, Peter Pan, the Confectionary, the Omnibus, the Monorail, and so much more. I keep revisiting these friends, because I know they can’t last forever.

As a parent, you don’t have to make any excuses for going to Disney once in a while. It’s kind of an expected activity. But going annually with the kids doesn’t win me any reprieves.

With kids, Disney trips are way different. (Shocker! Kids have minds of their own and they sometimes don’t want to do what the grownups have planned.) These are the years you do more relaxing by the pool and less drinking around the world.

She’s right. You have to be okay with missing out on some stuff when you travel with kids. It’s the dark side of Disney magic. The plan is to have you leave wanting more.

I’m a total sucker for it. As soon as I get back from Orlando, I’m booking again.

About four months post trip, my husband asks, “so when are we going back to Disney?” He’s a reluctant Disney fan and pretends to be annoyed, but I think he’d truly be concerned if I didn’t have a booking date.

Walt Disney’s once said, “Disneyland will never be completed. It will continue to grow as long as there is imagination left in the world.”

That famous line pretty much sums up how I feel about my visits and revisits to Walt Disney World. As long as “the World” keeps changing, I will keep popping in.”

Have a great day!