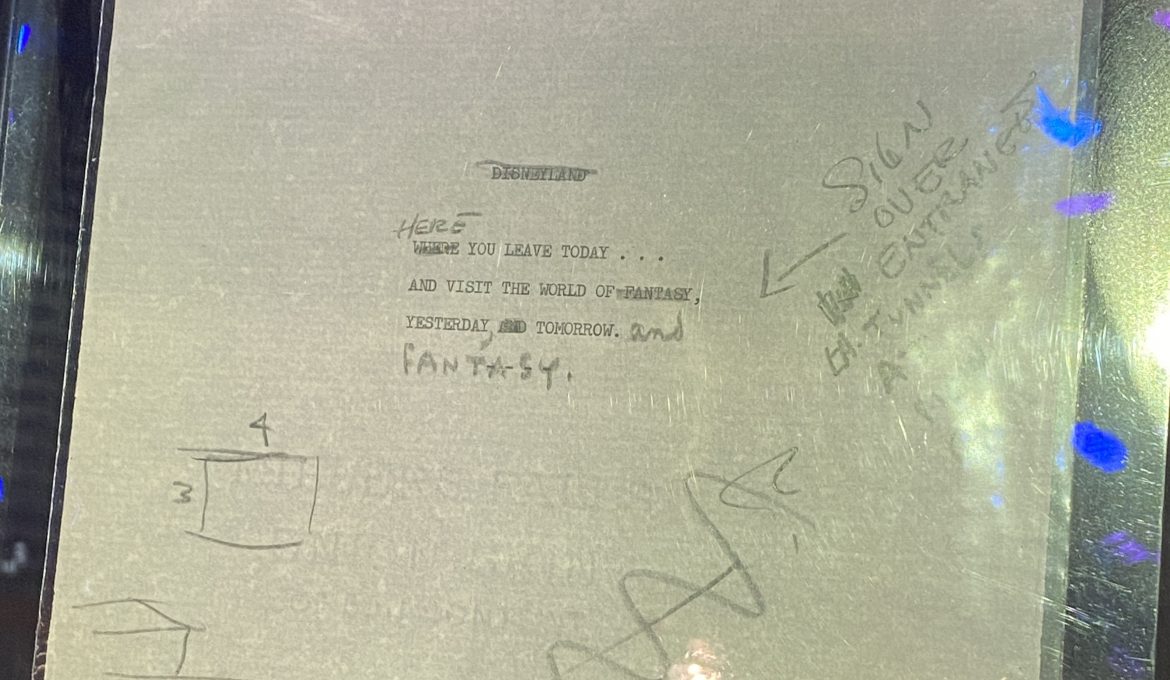 At its core, Disney thrives on storytelling. At the 2022 D23 Expo, it felt like everyone had a story to tell. If you are a person who chokes up when you hear about a magical moment or a memory from someone who actually knew Walt, then you understand.

Here are a few of the stories that I still think about all these weeks later:

On the Expo floor, Walt Disney World ambassadors Raevon Redding and Ali Manion were a delight to talk with. They didn’t just offer a “hello” and a “where are you from?” They were engaging. Raevon, who is from Central Florida, had a really inspiring story. He told me that when he was a kid, the Disney Ambassador visited his school to present him with an award. It was at that meeting that Raevon decided that someday he too, would become a Disney Ambassador. Now, if you are familiar with the ambassador program, Disney picks only two ambassadors for Walt Disney World every two years. It’s a pretty hard position to acquire. Raevon declared his wish, asked for all the steps he would need to make to achieve it, and then followed that advice. Proving that the first step to becoming a cast member is putting your intentions out there!

The Magic Of Working With A Pro

During the panel, Disney Legends in Conversation, newly crowned Disney Legend (music) Chris Montan recalled the day Angela Lansbury recorded the song Beauty and the Beast. She sang the whole song through and nailed it on the first take, he said. For those who remember the moment they first heard Mrs. Potts sing Beauty and the Beast during the iconic ballroom scene, maybe you can understand the emotion in the room. It’s no wonder the film was the first animated film nominated for Best Picture. (Today, the gift of Montan’s story is even more special after the passing of Angela Lansbury on Oct. 11, 2022.)

Many Paths Lead To Imagineering

During the panel, Walt Disney Imagineering: 70 Years of Making the Impossible, Possible, it was intriguing to learn the paths each Imagineer took to get the job! On the creative side, the beginnings were all over the place. Panelists Bob Weis started in popcorn sales; Charita Carter was a finance person; Kim Irvine worked in the model shop; Kevin Rafferty ran a dish room, and Jeanette Lomboy operated a Storybook Canal boat. On the engineering side, however, most of the Imagineers came into their positions right out of college and have been in Imagineering ever since. Makes sense!

Judy Rheim worked directly with Walt in 1965. He gave her permission to go anywhere and do anything she wanted inside the park. She remembers Walt telling her that he thought the President Lincoln Audio-Animatronic would bring the country together as it navigated the Civil Rights movement. Walt’s daughter, Diane, once thanked Judy for taking on the ambassador job. She told Judy that “Dad comes home for dinner” once she (Judy) was able to stand in for Walt at events.

Disneyland’s second ambassador Connie Swanson Lane, also shared stories of Walt. She said Walt gave her two pieces of advice when doing press. The first was to stand at a three-quarters turn when being photographed and look at the person’s ear who is speaking. The second was to “keep your elbow out of the mashed potatoes”, which meant, be aware of your surroundings and don’t get into a sticky situation. Swanson Lane was working at the park when Walt passed away. The news came as such a shock that even thinking about that day choked her up. When given the option to go home. She stayed, she said. She felt the guests at Disneyland would need her.

The first Walt Disney World ambassador, Debby Dane Browne, never got to meet Walt, but she does remember being flown to California in 1970 on Walt’s private plane. (Coincidentally, Walt’s restored plane was on display at the Expo.) She spent three months training at Disneyland — can you imagine? Her trip to participate in the 2022 D23 Expo was her first trip back to Disneyland in 52 years.

While Disney likes to make the impossible, possible, one thing it can’t do is make it possible to see and hear from every D23 panel. There were many, many stories we missed, but we’ll be back in two years for the next D23 Expo. We hope to see you there!