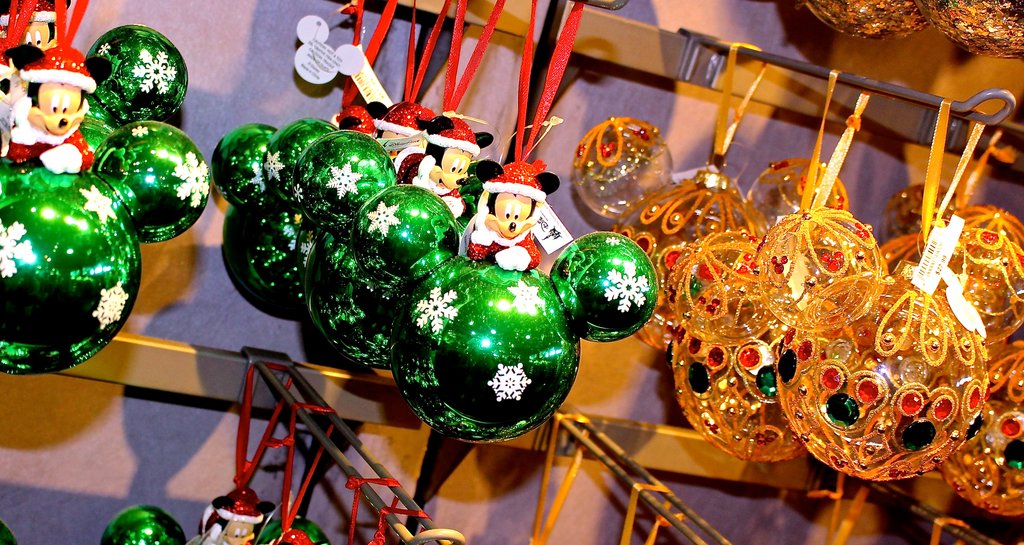 Let’s wind down 2018 with five fun anecdotes about Disney and Christmas.

It’s just not Christmas without hearing the classic 1966 song, “You’re a Mean One, Mr. Grinch.” It’s been covered a few times, but the voice of bass singer Thurl Ravenscroft (1915-2005) cannot be topped.

Did you know that Ravenscroft’s voice is tied to a ton of Disney projects? He voices the broken bust singing “Grim Grinning Ghosts” at the Haunted Mansion; Buff, the mounted Buffalo head at Country Bear Jamboree; Fritz, the German parrot, at Walt Disney’s Enchanted Tiki Room; and so much more.

Ravenscroft’s Disney resume is both long and impressive. His singing and voice appear in films as far back as 1941’s Dumbo and as recent as the three Brave Little Toaster cartoons in 1987, 1998 and 1999. Many of his roles were uncredited, but Disney has tried to reconcile a lot of that and made him a Disney Legend in 1995.

Despite all his work for Disney, however, Ravenscroft’s most famous line was given to him by the Kellogg’s Company. From 1952 to 2005, he was the voice of Tony The Tiger™ and was the first voice to boom, “They’re GR-R-REAT!”™

Every year, Disney kicks off the holidays with a massive Toys for Tots drive. (Walt Disney World cast members collected over 30,000 toys this year.) Obviously, children are the reason the connection between the Disney Company and Toys for Tots is so strong, but did you know that the relationship goes a lot deeper?

Toys for Tots was founded in 1947 by Marine Corps Reservist Major Bill Hendricks. Hendricks was the director of Public Relations at Warner Brothers Studios and had lots of celebrity friends to draw on for support of his initiative to collect and distribute toys to children whose parents could not afford to buy them. Walt Disney was a friend of Hendricks, and not only did he provide financial help, but he also offered his creative mind as well. It was Disney and his artists who created the first Toys for Tots promotional poster, which included a miniature three-car-train. The train was loved so much, it was adopted as the official Toys for Tots logo shortly thereafter. The organization still uses it today.

Disney takes its gingerbread houses seriously. We counted 13 gingerbread creations on display by the company this year, although you’d have to be a serious world traveler to see them all. Disneyland has two, Walt Disney World has six, and the four Disney cruise ships each have one as does the Aulani resort in Hawaii.

The grandest of all, of course, is at Disney’s Grand Floridian Resort and Spa. This year is actually the 20thanniversary of the Grand’s gingerbread display. If you haven’t seen it, it’s worth the effort (it’s just a monorail ride away from the Magic Kingdom and Epcot). At 14-feet tall, the Grand’s gingerbread house is large enough to enter and purchase some gingerbread shingles (and other treats).

It’s been almost three years since the Osborne Family Spectacle of Dancing Lights ended at Hollywood Studios, but the show is not forgotten and still greatly missed.

More than 3 million lights choreographed to music made up the display, which was a seasonal attraction from 1995 to January 6, 2016. Today it only lives on YouTube.

The history of the lights is an interesting tale. In the 1980s, Jennings Osborne of Little Rock Arkansas wanted to really impress his little girl, so he decked out the house in lights for Christmas. Every year, he increased the number of lights in his display. Eventually, it grew too large for his property, and he bought two neighboring properties to accommodate the show. By 1993, Osborne had 3.2 million lights burning. According to Disney historian Jim Korkis, the display needed so much power that the electric company assigned the property its own transformer.

Well, the neighbors became a little fed up. The lights were too much and the number of visitors coming to the site created traffic jams and safety issues. They took Osborne to court and restrictions were implemented. Osborne appealed, first to the Arkansas Supreme Court and eventually to the U.S. Supreme Court. Osborne lost both appeals, and he shut down the display in 1995.

The publicity, however, caught the attention of Disney. The company purchased Osborne’s entire setup and added it to Hollywood Studios. For the 1995 Christmas holiday, the lights decorated the Backlot Tour attraction’s residential street. When the residential street was closed to make way for other attractions, the lights were moved to the New York Street Set (aka Streets of America).

Disney closed the show after the 2015 holiday season to make room for Star Wars: Galaxy Edge. And while change will always be part of the parks, in this case, I will be asking Santa to someday bring back the “Spectacle”.

Christmas Day is one of the few days of the year that it’s likely the Magic Kingdom will be closed for capacity. Usually, this happens around noon.

But what does “closed for capacity” mean?

Some of the best Disney attendance followers out there think that the Magic Kingdom has the capacity to hold more than 100,000 people. Think about it. The Magic Kingdom is 142 acres and 100,000 people is pretty much the population of the City of Green Bay, Wisconsin. That’s a massive crowd.

Disney does not share park attendance figures with the public so the number of people in the park on the busiest day of the year is a real mystery. And even though a Christmas Day visit would test both my patience and the warranty on my steel-toed boots, I still think it’s a bucket-list worthy endeavor. Just once.

Happy Holidays & Thanks For Popping In!