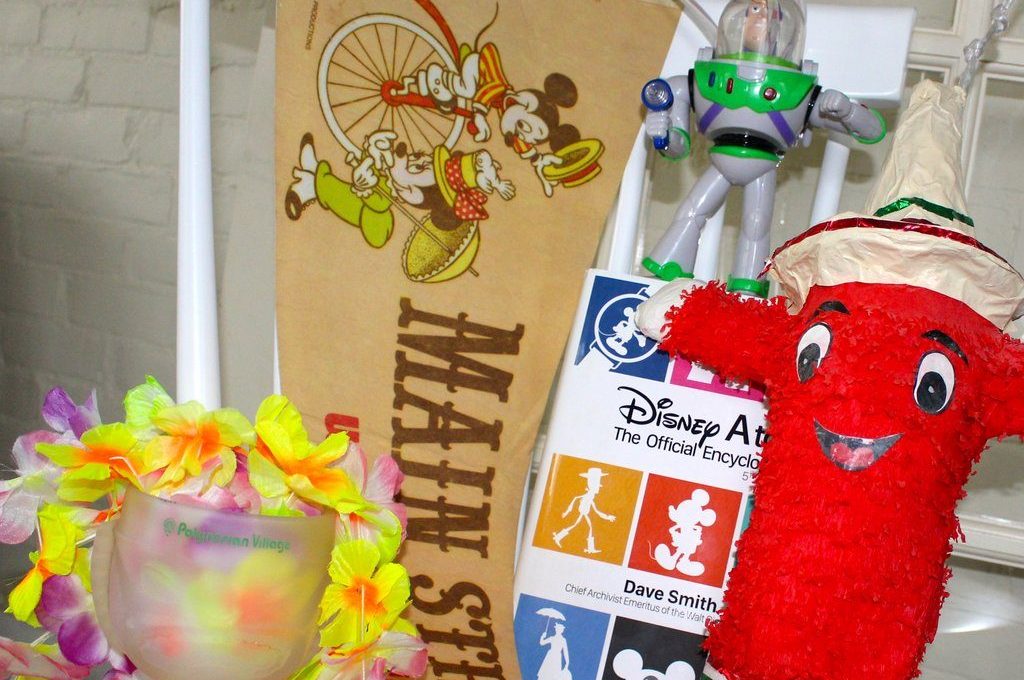 I’ve bought many things from Disney over the years. Not everything turned out to be a wise investment (I’m talking about you $18-misting-fan), but for the most part my Disney swag brings me lots of joy.

There are, however, a few items that have withstood the test of time; treasures that will never end up at a garage sale on my watch. In fact, today I counted five Disney souvenirs that I love more today than on the day I got them. From oldest to newest, they are:

My memory is shady on this one. In 1977 or 1978, we met up with my aunt, uncle and cousins who were staying at the Polynesian Village resort, and someone purchased a grownup drink in this amazing tiki schooner. I don’t know if the glass was included in the drink price, if my family paid extra to keep it, or if it was picked up at a 5-finger discount, but I’m am so happy to have it. How it has survived nearly 40 years in our rowdy household I will never know, but if I had to pick my favorite piece of Disney history, tiki glass would be it!

This is a souvenir that I forgot all about until it showed up recently in a box of stuff. Finding it felt inevitable after starting our Main Street Pop In website and blog. I guess Main Street has been in my blood all along.

What I love most about this pennant is that it could easily be for sale at The Emporium today. It embodies all that I love about Main Street, U.S.A.—the old-time nostalgia, Mickey and Minnie, and dapper day attire.

My one and only attempt to “drink around the world” left me with a slight hangover and Pepe, a miniature hot pepper piñata from the Mexico Pavilion market. I adore Pepe because he’s the first Disney souvenir my husband and I ever bought together. Every year I have to rescue him from my kids’ attempts to stuff him with candy and smash him with a bat. No one really knows he’s a Disney souvenir or why he’s so special, but I do!

This souvenir saved my sanity and will always have a home on my shelf. Here’s the story.

In 2013, my 3-year-old—on the brink of exhaustion—needed to be out of the park and in bed. He and I left behind the rest of our group at the Biergarten Restaurant in Epcot’s Germany. I “thought” the fastest way back to Bay Lake Tower would be the Monorail. On the way to the station, my son became intrigued with the light up toys for sale. I acquiesced and bought him a Buzz Lightyear doll that lit up and spun when his legs were squeezed together. I really thought it was a waste of $15, but was too tired to care.

Then we got on the Monorail. A new train had just pulled in. The doors shut and we waited, and waited, and waited. For almost an hour we waited for the vehicle to leave the station. My 3-year-old just kept squeezing Buzz and didn’t register one complaint.

Eventually we were on our way only to be stopped on the track, suspended at night in the middle of nowhere. In the end, we reached our room five-minutes ahead of the rest of the family, who we had parted ways with 90 minutes earlier. However, without Light-Up-Buzz I don’t even want to think about what being trapped in the monorail with a tired toddler could’ve been like. Buzz saved me!

The 5th Edition Of “Disney A to Z: The Official Encyclopedia” by Dave Smith (2016)

Last but not least is the nerdy souvenir I cannot do without—my Disney encyclopedia. Don’t judge. This isn’t just any reference book, this is my go-to for every Disney fact, timeline and spelling. I never thought I’d actually want to read an entire 858-page encyclopedia cover to cover, but this book is so full of information, I’m well on my way.

“Disney A to Z” is written by Walt Disney Archives Founder Dave Smith, who sadly passed away on February 15, 2019. Dave spent four decades preserving the company’s history. He was named a Disney Legend in 2007 and is the final authority on all matters of Disney history. A person just can’t be a Disney writer without “Disney A to Z”.

So, all this makes me wonder. In another 40 years, what other Disney souvenirs will hold a sacred place in my home and in my heart? I can’t wait to find out. Let the treasure hunting begin!