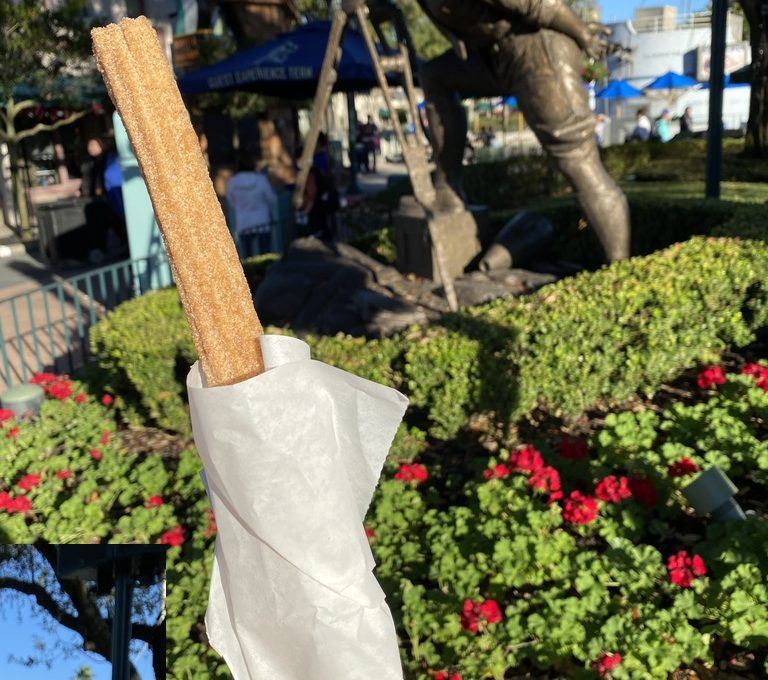 But that’s only half the story. Legend has it that churros were first served in Disneyland in 1985 after a Disney manager tasted them at the Long Beach Grand Prix and thought they’d make a good addition to the park’s Videopolis. The snacks were a hit from day one, and the rest is food history.

Disneyland is the king of over-the-top churros. Some examples include the pineapple marshmallow churro, the S’mores churro, or the carrot cake churro. Walt Disney World’s churros are more uniform, usually a cinnamon-sugar wand with a chocolate dipping sauce on the side.

So, what is a churro, and where did the come from?

Basically, a churro is a simple dough of flour, water, butter, eggs, and salt, deep fried until crunchy and sprinkled with sugar. They originated in Spain and Portugal as a breakfast food or snack.

In Europe, they are traditionally dipped in a pudding-like chocolate or hot beverages flavored with with chocolate, caramel or coffee and milk (such as champurrado, hot chocolate, dulce de leche, or café con leche).

But the churro’s history goes much further back, maybe even back to ancient China and the Aztecs. While the history of churros isn’t ironclad, most food historians agree on one of two stories.

The first story is that the Portuguese learned how to make the dough in China during the Ming-dynasty. The story persists because Churros resemble a savory, deep-fried flour stick made in China called a youtiao. The thought is that the Portuguese took the idea of the youtiao, added sugar, and turned it into a sweet breakfast food.

The second story is that Spanish shepherds learned that the pasty dough fried on an open fire was tasty and easy to make while out on the mountain. The name, churro, is thought to come from the look of the ridged horns of Churra sheep, native to Spain.

All seem to agree that the Spanish invented the churros ridged shape by piping the dough through a star-shaped nozzle. And after the Aztecs introduced chocolate to the Spanish in the 1500s, the custom of dipping churros into chocolate seems to have begun.

Churros are flavored differently in many countries. Mexico fills its churro dough with different versions of caramel (dulce de leche), Brazil has its own version of a caramel or chocolate dip, Cuba stuffs churros with a guava-filling, Columbia and Venezuela top churros with a glaze made with sweetened condensed milk, and Nicaragua and Uruguay use a savory cheese filling. It seems that only Americans rolls the dough in cinnamon and sugar.

All agree that churros are best when made fresh and sold hot. Unfortunately, at the Florida parks, churros aren’t made-to-order as they should be, but they are still a great snack that is more than a must-have–they are a must-have every day!

There’s lots of spots to find churros at each Florida theme parks and at Disney Springs, such as:

Cool Ship at the Magic Kingdom

The Lunching Pad at the Magic Kingdom

Dino Diner at the Animal Kingdom

Nomad Lounge at the Animal Kingdom*

Paradiso 37 at Disney Springs, The Landing*

Capa at the Four Seasons Resort near Disney Springs*

Prices vary from $5.25-$7 at quick service and cart locations and $9-$14 for sit-down restaurants*, where churros are often a more embellished dessert option.

We also found a copy of a churro recipe on the Disney Parks Blog. If you just can’t wait to get to the park for a churro snack, try making them at home!

Instructions
1. Combine 1 cup water, 4oz butter, ¼ tsp salt, ¼ tsp cinnamon in a pot over medium heat
2. Bring pot to a rolling boil
3. Add 1 ¼ cups flour
4. Reduce heat to low
5. Stir vigorously until the mix forms a ball
6. Remove from heat and let rest for 5-7 min
7. Add 3 eggs, one at a time, and stir until combined
8. In a skillet, heat 1 ½ cups of oil to 350 degrees and stir
9. Spoon rested dough into a piping bag
10. Squeeze 1-inch strips into hot oil
11. Fry churro tots until golden
12. Drain churro tots on a paper towel
13. Coat in cinnamon/sugar mix
14. Serve with melted chocolate sauce