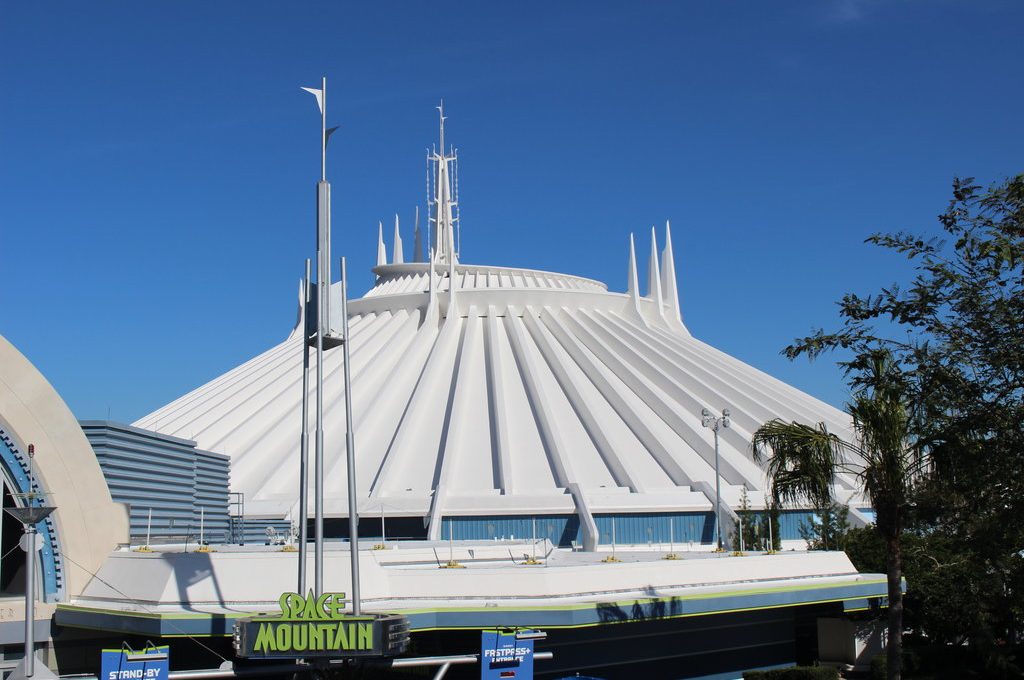 Attraction: Space Mountain
Theme Park: Magic Kingdom
Location: Tomorrowland
Year Opened: 1975
Movie Tie-In: Rumor has it that a Space Mountain-based filmed was in the works, but the project was scrapped after the company bought the Star Wars franchise in 2012. The Space Mountain building appears as an Easter Egg in Meet the Robinsons and Tomorrowland.

It’s hard to believe that when the Magic Kingdom opening in 1971, Space Mountain wasn’t a debut attraction. Can you imagine Tomorrowland without it?

In the 1960s, Walt Disney thought Tomorrowland needed a thrill ride that incorporated the love Americans felt for space exploration. The technology did not exist at the time to bring Walt’s vision to life, but Disney Imagineers were patient and eventually the scientific know-how became available to make the idea work. Imagineers even enlisted the help of Mercury 9 and Gemini 5 astronaut Gordon Cooper to make sure the attraction felt as real as possible.

Space Mountain debuted in 1975 and has been a favorite ever since.

The attraction is an immersive experience. The ride’s futuristic exterior sits at the front corner of the Magic Kingdom and is one of few things that can be seen by guests before entering. The white, cone-shaped structure rises 183 feet into the air.

Upon entering, riders begin a walking journey to the center of the structure. Windows along the way appear to be looking out into space and in one part of the queue guests can pass the time by blasting asteroids or playing other video games.

Space Mountain is a dark ride in every sense of the word. Riders board retro looking rocket ships that carry six passengers at a time. Upon launch, guests experience a few seconds of flickering light and a quick photo op, before being blasted off into the darkness of space. Planetarium-type images move across the ceiling above, but Space Mountain’s pace doesn’t give riders much time to contemplate the cosmos before interrupting with a turn, dip or dive.

Despite its traveling speed of 28 mph (kiddie rollercoaster—the Barnstormer—moves at 25 miles per hour) Space Mountain still succeeds at being a thrill ride. Kids and grownups alike count it among their favorite Disney attractions, and it certainly is a must do recommendation. The ride lasts less than three minutes, and ends with a landing in a tunnel of red light, a quick unload, and a moving sidewalk ride into a gift shop.

Guests must be 44 inches to ride Space Mountain, but parents of little ones can take turns riding using the rider-swap system. Just ask a castmember at the entrance.

If you arrive at the Magic Kingdom for rope drop, you will find a short wait for the ride if you head straight to it when the park opens. Otherwise, a FastPass is highly recommended for those who are line-averse. On really hot or rainy days, however, a long Space Mountain wait is the perfect respite from the heat and bad weather. The queue is completely indoors and air-conditioned.

Space Mountain doesn’t win any awards for being the highest, fastest, longest or most thrilling rollercoaster in America. But, if a trophy exists for most nostalgic—Space Mountain is the winner hands down.