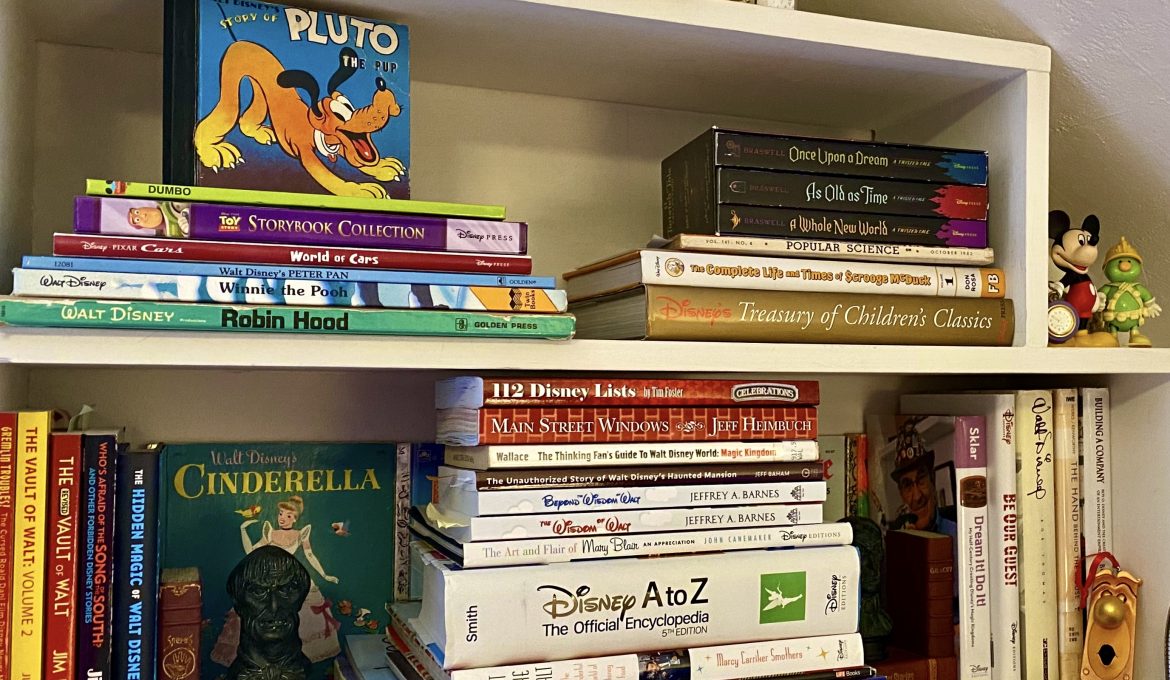 With so many news reports and interviews taking place from people’s homes, I’m finding myself more and more interested in what books are lining the shelves so often in the background. What are they reading, and what does it say about them?

If you’re someone who not only loves books but lives with books (i.e. you keep them, decorate with them, or call them your paper babies) then, maybe you know what I mean.

I have a Disney bookshelf—where I organize all my books, comics, and magazines. It’s not a huge collection, but it grows monthly. (You’re probably NOT surprised that there is a ton of Disney content out there.)

If you’re looking to get your Disney fix this week with a little reading, here are a few suggestions.

If there were a “Walt Disney 101” course, this would be the textbook. Thomas, a well-renowned Associated Press reporter and author, used actual interviews with Walt and his family to put this biography together. It’s well-written and well organized with all the important milestones every Disney fan would want to know.

“Walt Disney Imagineering: A Behind the Dreams Look at Making the Magic Real” by The Imagineers

This coffee-table book is 192 pages on Imagineering—Disney Speak for the imagination and engineering it takes to build park attractions. This book is filled with artwork and photos, so it’s a quick read.

“Eat Like Walt: The Wonderful World of Disney Food” by Marcy Carriker Smothers

It’s a history book and a cookbook, with lots of vintage photos. There are 33 recipes in all, including Walt’s favorite, Chili and Beans.

“The Ride of a Lifetime: Lessons Learned from 15 Years as CEO of the Walt Disney Company” by Bob Iger

I thought this was going to be a dry read and I ended up loving it. While certainly sanitized by the author and Disney Company, it focuses on how one can be honorable, empathetic, and a successful CEO.

“The Vault of Walt” by Jim Korkis

If I had to credit one person for inspiring me to become someone who loves to write about Disney, it’s Jim Korkis. He’s a phenomenal researcher, interviewer, and storyteller. With access to the Disney archives and veteran cast members, Korkis gets never-before-told stories out of people.

“Disney War” by James B. Stewart

An in-depth, behind-the-scenes look at the Disney Company, Disney War is about the feud between those with the Disney name and those without. Many of those depicted in this book have issues with how they were portrayed, so I’m not saying it’s the gospel truth, but it’s a good read.

“Disney A to Z: The Official Encyclopedia” by Dave Smith

A Disney nerd’s dream book. Every date and fact about Disney all crammed into 858 delicious pages. No, I haven’t read every word, but it’s my go-to book for creating content for Disney trivia night.

“twenty-three”published by the D23 Fan Club

Mailed out each season, twenty-three is a magazine you will never throw into a recycling bin. The photography and design will keep you looking at it again and again. twenty-three is best at promoting new Disney content and Disney+ offerings, but every issue also includes one or two fascinating archive pieces.

Naming one Little Golden Book as “the best” is subjective. For most people, it’s probably the LGB you liked best as a child. But some of the original books created during Walt’s time, like Cinderella, are fascinating. Many include early artwork that never made it into the final Disney animated films.