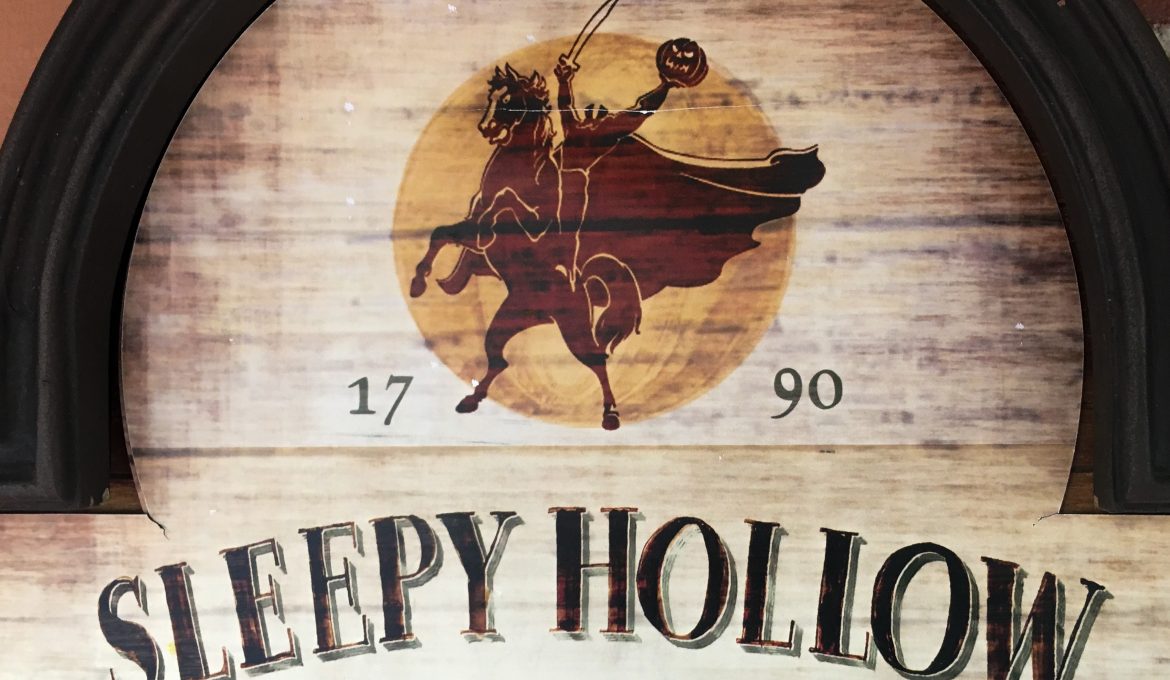 Before VCRs and DVRs and streaming, the Disney animated film I most looked forward to at Halloween was the story of Ichabod Crane and the Headless H.

As a kid, I liked it mainly because it was a cartoon, a little scary, and it was on at night, which meant that I’d get special permission to stay up past bedtime to watch it.

My mom probably liked it because it featured the narration and crooning of Bing Crosby, and my English-teacher father was most certainly there to ensure that the storyline remained true to the original Washington Irving short story, The Legend of Sleepy Hollow.

If you aren’t familiar with the TV special, I remember it being called “The Legend of Sleepy Hollow”, just like the book. It closely followed the Irving folktale about the real-life town of Sleepy Hollow, New York; its Dutch settlers after the Revolutionary War; and the phantom that hangs out at the church cemetery.

The main character is Ichabod Crane, an odd schoolmaster, who sets his sights on marrying the wealthy Katrina Van Tassel. Her boyfriend, Brom Bones, will have none of that and tries to scare Ichabod out of town by telling him the place is haunted by s Horseman. Does Ichabod leave or is he carried away by the deadly spirit? It’s up to you to watch and decide.

These days it’s no longer necessary to wait around for “The Legend of Sleepy Hollow” to appear on prime-time television. It’s easy to find online or at your local library.

But that’s not entirely what today’s blog is all about. After watching the film, I took an afternoon to read Irving’s short story, and then did a little research to learn more about this classic tale.

Second, I learned that Irving’s original 1820s story was updated in 1917 to give the Headless Horseman a backstory. Apparently, he was a Hessian soldier “whose head had been carried away by a cannon-ball”. Calling him a Hessian trooper probably made the horseman even more of a “bad guy” to Americans since the Hessians fought for the British during the Revolutionary War.

Third, in Disney A to Z: The Official Encyclopedia, I learned why the Disney DVD I own is sold under a different title than the TV special I remember. You see, in 1949, the Sleepy Hollow animated film was too short to release on its own. So, it was packaged with another short, animated film based on the book, The Wind in the Willows. The combo was released in theaters as, The Adventures of Ichabod and Mr. Toad and it was known as a “packaged picture”.

Several packaged pictures were created by the Walt Disney Studios during World War II in an effort to save money. Like many businesses, Disney had financial troubles in the 1940s. The War had taken away a number of employees, films could not be distributed in Europe, and Disney was animating training films for the military pretty much at cost. There was little time or money left to create full-length features for profit.  Packaged pictures cost less to make, and “Adventures” saved even more money by reusing animation cycles and patterning characters off of those previously created.

Thankfully, all that penny pinching worked. After The Adventures of Ichabod and Mr. Toad was released, the studio was finally able to go back to making longer, one-story, animated features.

Do you know what the that next film after Sleepy Hollow was?