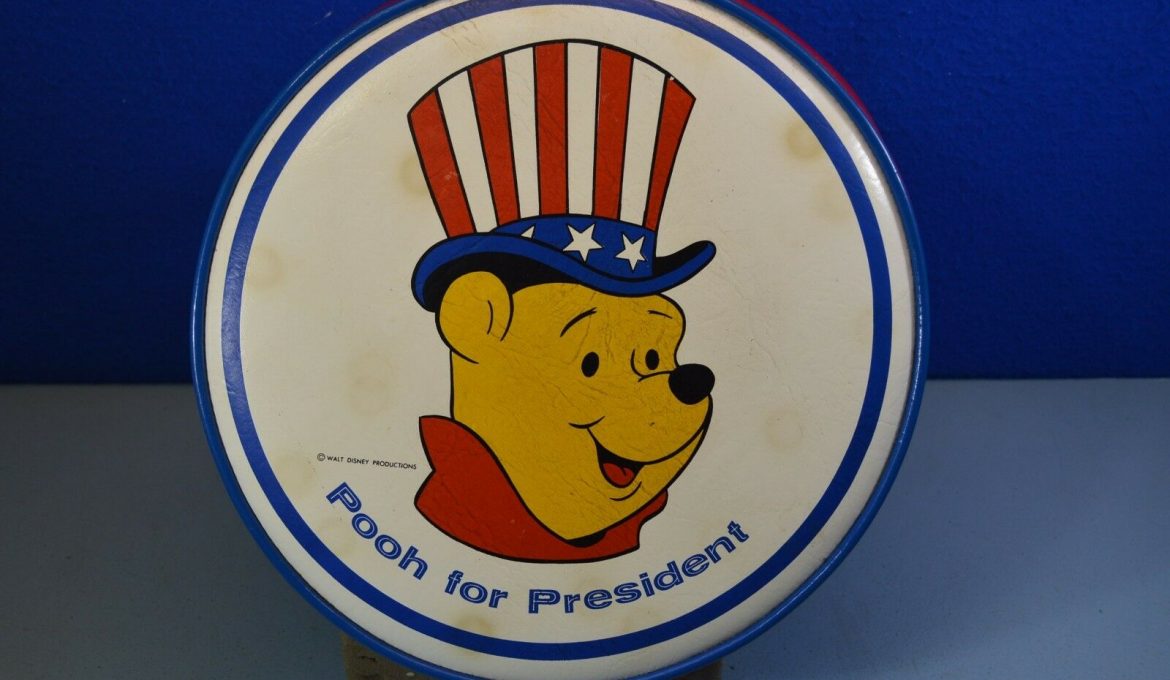 The Disney Company tries to keep its nose out of politics, but there are a few Fun Facts about Disney politics that we couldn’t resist reminding you of this election season.

Winnie the Pooh ran for president four times, in 1968, in 1972, in 1976, and in 1980. Promising “Hunny in Every Pot” and much more, he ran on the Children’s Party ticket. Pooh proudly named his friend Piglet as his running mate and campaigned cheerily at the Disney parks each election year. Pooh for President merchandise was sold at Sears. Unfortunately, Pooh’s birthplace was never clearly established. The original Pooh character was created by A.A. Milne in the U.K., but Disney’s version of Pooh was created in the U.S. Pooh’s status as a Presidential candidate, therefore, has always been considered “unofficial.”

According to Disney Historian Jim Korkis, “Mickey Mouse is perhaps the best-known and most frequently used character as a write-in candidate.”

Mickey has been appearing in write-in spaces since as far back as 1932. In 1987, Georgia passed a law to ban voting for Mickey in state elections. Since then, many other states have passed similar laws to allow election officials to ignore votes cast for anyone who hasn’t registered as a write-in candidate.

Walt Disney is often cited as being a member of the Republican party. As a businessman, Walt didn’t often share his political views so as not to alienate the public or local leaders. But according to Ancestry.com, Walt appeared on the State of California’s voter registration lists in both 1924 and 1944 as a Republican.

We also know that Walt idolized Abraham Lincoln, he felt betrayal by his employees who went on strike in 1941 and unionized, and he endorsed and donated to the Presidential campaigns of Thomas Dewey, Dwight Eisenhower, Barry Goldwater, and Richard Nixon. But Walt also voted for Democrats, such as Franklin Roosevelt in 1936 and told his daughter that he felt Social Security performed an important role in helping people. Shortly before he died, Walt also told his daughter that he considered himself a true liberal.

The Disney Company actually governs the land on which Walt Disney World sits. The Reedy Creek Improvement District is an actual government entity run by Disney with powers similar to a county. The District was created in 1967 by a special Act of the Florida Legislature. The area is 25,000 acres and a five-member Board of Supervisors are elected by landowners (all of which are all Disney affiliated) to govern the district. In the 2000 Census, 39 residents lived within Reedy Creek’s boundaries, but none own land and therefore have no say in district elections.

Former Disney CEO, Bob Iger, almost gave up his role at Disney to run for President of the United States. In his autobiography, The Ride of a Lifetime, Iger touches briefly on his interest in politics. A few years ago, he explored a run for the presidency. He was in communication with members of the Obama administration and Congress, pollsters, fundraisers, and staff from previous presidential campaigns. He was studying up like crazy on current events, history, economic policy, the Constitution, and the Bill of Rights. “I was waking in the middle of the night with nightmares about being on a debate stage and feeling unprepared,” Iger wrote.

Ultimately, Iger made the decision not to run. His wife was not crazy about the idea and he was unsure the Democratic Party would embrace a businessperson as its candidate.

And now we know how the world lost out on an Iger vs. Pooh Presidential race?

Sources: Winnie the Pooh for President by Jim Korkis, Mouse Planet, (mouseplanet.com) April 24, 2019; Federal Election Commission of the United States of America website (fec.gov); If You Give a Mouse a Voteby Jaime Fuller, The American Prospect, (prospect.org), Nov. 5, 2013; Things You Never Knew About Walt Disney by Jim Korkis, Mouse Planet (mouseplanet.com) Dec. 6, 2017; Ancestry.com; Wikipedia; Disney A to Z: The Official Encyclopedia 5th Edition by Dave Smith; The Ride of a Lifetime by Robert Iger (2019)