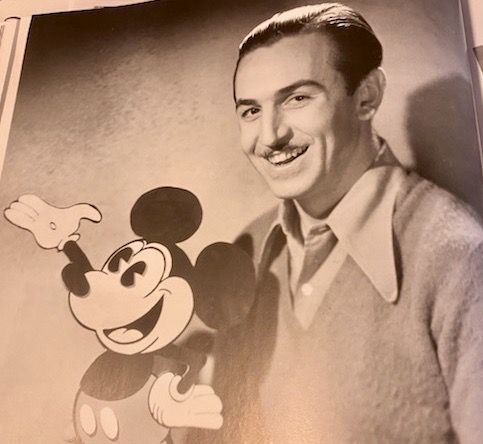 Last week, we shared some stories of Walt’s childhood. Today, we are diving into how Walt became the master of cartoon shorts.

Our history begins in the fall of 1919. Walt had just returned home from war-torn France and was eager to join his brother Roy back in Kansas City.

At 17, Walt’s plan was to become a political cartoonist, but instead, he found work as a commercial artist at the Pesmen-Rubin Commercial Art Studio. There he befriended Ub Iwerks.

The job at Pesmen-Rubin was short-lived. Ub and Walt worked the holiday rush and were then let go. Eager and confident, they created Iwerks-Disney Commercial Artists, but after a month the money dried up. The two found work at the Kansas City Film Ad Company where they learned the art of making “cartoons that moved”.

With a steady salary, Walt had the means to dress with style, date, and make his own cartoons on the side. Walt started another business, Laugh-O-gram Films. Laugh-O-grams provided him with a wealth of experience but very little money. Fed up with the cartoon business, Walt headed to Hollywood to become a director.

Not surprisingly, none of the studios were looking to hire an inexperienced director. Roy, who was already living in California recovering from tuberculosis, convinced Walt to get back into cartooning, and together they started the Disney Brothers Studio in 1923.

Things were going well. Walt and Roy married and continued to produce the Alice Comedies. In 1926, they changed the name of the Disney Brothers Studio to the Walt Disney Studio (Roy thought the single name had more box office appeal.). The company purchased space on Hyperion Avenue and started producing a new series, Oswald the Lucky Rabbit. When the Oswald contract was up for renewal in 1928, Walt and his wife, Lillian, took the train to New York to seal the deal.

But there was no deal. M.J.’s new husband, Charles Mintz, had taken over the distribution business. Mintz hired away all of Walt’s animators (except for Ub) and planned to produce Oswald without him. Walt was devastated. Although Walt created Oswald, he didn’t own him. Walt vowed never to work for someone else again.

Legend has it that Walt conceived the idea for Mickey Mouse on that train trip back to California to deliver the bad news to Roy. In reality, Mickey was developed jointly by Ub and Walt. Lillian chose the name Mickey (over Walt’s suggestion of Mortimer).

Getting theaters to take a chance on Walt’s new Mickey Mouse character became the next big challenge. Walt gambled all he had to make Mickey Mouse unique. On Nov. 18, 1928, audiences watched the debut of Steamboat Willie, the first “talking” cartoon. Walt’s invention of synchronized sound changed cartooning forever.

The Walt Disney Studio kept plugging away, creating innovative work but losing money. To make matters worse, Ub and Walt had a falling out and Ub left the company. The financial stress and the loss of Ub caused Walt to have a nervous breakdown.

When Walt recovered, the studio discovered a lucrative revenue stream — licensing agreements. The Studio also struck gold with a surprise hit, the Three Little Pigs. The 1933 retelling of the classic story was a masterpiece. In some cities, the billing for Pig was above that of the featured film. Orchestra leaders all over the country were performing “Who’s Afraid of the Big Bad Wolf?” and movie houses were asking for “more pigs”.

The stars were aligning for Walt. Professionally his business was prospering and personally, he and Lillian’s wish to be parents was finally granted when daughter Diane Marie was born on Dec. 18, 1933.

With so much going right for Walt, he was ready to take on his next big idea.