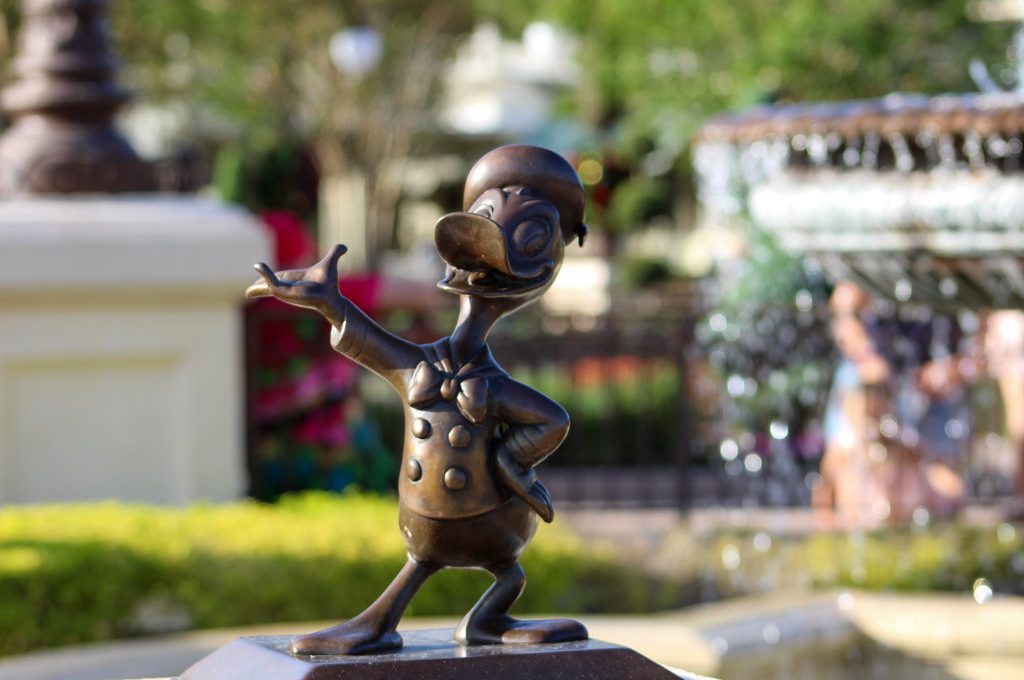 Here at MAIN STREET POP IN, we like to keep it short and simple. There is no way a blog can tell you everything there is to know about Walt’s life, but we hope that having a little bit of information about the man who created Walt Disney World may add some meaning to your park visits. Today we take a look at Walt’s life in the 1930s and 1940s.

During the Depression, theater owners lured audiences in with double features – two movies for the price of one. Although great for the public, the increase in double features meant that there was less to spend on short content, like cartoons.

Although Disney animated shorts were still popular, Walt knew the time was right to try something new.

For $500,000, Walt wanted to make the first full length animated feature. His wife, Lillian, and business-partner and brother, Roy, were “alarmed.”

Walt picked the story of Snow White for his ambitious project. It had a heroine, a villain, sympathetic sidekicks, and a solid plot. Snow White and the Seven Dwarfs was “pioneering” and almost every Disney employee worked on its development. Walt controlled everything and the cost blew past the original estimate by $1 million.

Those outside the studio were beginning to call Snow White, “Disney’s Folly” and the bank was beginning to feel unsure about the cost. Walt soldiered on, demanding excellence every step of the way. (The work was so well done that it only took the review of a few rough sequences by one bank loan supervisor to assure Bank of America that the investment was sound.)

Fun Fact: During work on Snow White a joy came to the Disney family. Adopted daughter Sharon Mae was born on Dec. 31, 1936 and welcomed into the fold.

On Dec. 21, 1937, Snow White and the Seven Dwarfs premiered at the Carthay Circle Theater in Los Angeles. The Hollywood VIPs in attendance laughed, cried, and congratulated Walt with a standing ovation. Snow White ended up raking in $8 million in six months.

Money opened up new opportunities for Walt, but life threw him a few curveballs as well. First, Walt crushed four vertebrae playing polo, an injury that never healed correctly and left him with a lifetime of pain. More shocking was the accidental death of Walt’s mother, Flora in 1938. Walt and Roy had convinced Flora and their father, Elias, to move from Oregon to Southern California so they could help care for them. Less than a year after the move, Flora died from asphyxiation caused by a faulty furnace. Walt and Roy blamed themselves because they had bought the house.

While the Disneys were grieving, the world was asking for more dwarfs.

Walt wasn’t interested in a sequel, but he was working on three new animated features – Pinocchio, Fantasia, and Bambi– and the construction of a new state-of-the-art studio in Burbank.

Then war broke out in Europe. Overseas markets dried up. Pinocchio, Fantasia and the company’s first live-action film, The Reluctant Dragon, failed to make a profit. To save the company the Disney brothers had to make a public offering of stock, which raised $3.5 million.

Soon another hurdle hit the studio. Some animators wanted to unionize. Walt laid out the company’s financial situation and spoke against the move but said he would not stand in their way. The atmosphere at the studio was tense and eventually a strike happened. About 40% of the animators picketed.

Walt was angry, hurt, and felt the campaign against him was untrue. He escaped the situation by accepting an invitation to travel to South America on a good will mission and a film-making tour. (The U.S. was nervous about the number of Germans and Italians moving to South America with Axis-power sympathies.) Two films resulted from the mission, Saludos Amigos and The Three Caballeros.

While Walt was away, the strike was settled without him. Walt also received word that his father passed away at the age of 82.

Walt went back to work. He found success with Dumbo, a quickly made, 64-minute animated feature, but it was not enough to relieve the debt the company was carrying.

Then the war came to Walt’s front door. On Dec. 7, 1941 – the day of the bombing of Pearl Harbor – the army arrived to take over the studio. Apparently, its location was ideal for “defense of the mainland.” Eight months later, after the threat of a west coast strike abated, Walt and Roy agreed to help in the war effort by using the studio to make military training and propaganda films. All work on animated features (except for Bambi) stopped. A number of drafted Disney artists were sent to the studio to work in uniform.

Several Disney war-time projects made history during those years: The New Spirit – a Donald Duck cartoon, successfully encouraged Americans to pay their taxes; Der Fuehrer’s Face – also a Donald Duck cartoon, mocked Hilter and angered Nazi commanders; and Victory Through Air Power – was watched by FDR on the recommendation of Winston Churchill and may have played a role in the decision to give the D-Day invasion sufficient air power.

Like all Americans the Disney brothers rejoiced when the war ended, but their business was in financial trouble. While other movie studios had made profits from war films and musicals seen by the public, Disney made very little from its government contracts. In fact, Disney owed Bank of America $4 million.

Walt and Roy were summoned to appear before the bank’s Board of Directors. They expected the worst, but luckily had an ally in Bank of America’s founder and Chairman, A.P. Giannini. He told his board, “There’s nothing about those pictures that will be changed by the war. They’re good this year, they’re good next year, and they’re good the year after that.”

The board allowed the Disneys to stay in business. It was a risk that paid off.

Sources: Walt Disney: An American Original by Bob Thomas; Disney A to Z: The Official Encyclopedia by Dave Smith

For more about Walt Disney, read Part 1 and Part 2 in this series.